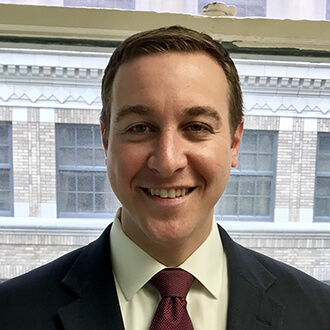 Mesothelioma
Jason is dedicated to helping mesothelioma victims and their families.

Jason Yampolsky is an associate attorney with the firm.

Jason has been representing men and women who have been the victims of asbestos exposure for several years. He has represented clients across the country, and has litigated asbestos claims in Missouri, New Jersey, New York, and Pennsylvania state courts, as well as federal court. Jason develops close relationships with his clients and their families, and tends to keep in touch with his clients even after their cases resolve. Jason has successfully represented many clients in depositions. Jason is adept at cross-examining corporate witnesses and arguing motions in court. He has extensive experience defending his clients' experts in depositions as well as cross-examining defense experts. Jason prepares each one of his cases for trial, but he is a skilled negotiator and has been able to extract sizable settlements from corporate defendants. Prior to joining Maune Raichle Hartley French & Mudd, Jason began his career as a prosecutor in New York City, where he oversaw investigations and had an impressive streak of trial wins. After leaving the District Attorney's Office, Jason represented asbestos victims at another prominent New York City law firm before joining Maune Raichle Hartley French & Mudd.