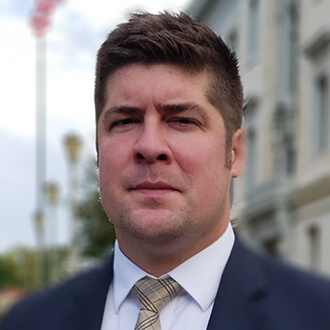 Mesothelioma
Tom is dedicated to helping mesothelioma victims and their families.

Tom has dedicated his law practice to zealously representing victims and victim’s families.

He is deeply committed in helping his clients and their families receive the compensation they deserve. Tom is licensed to practice in Illinois and travels the country exclusively representing those affected.

Tom earned his Juris Doctorate from Saint Louis University School of Law in 2014. While attending SLU Law, Tom clerked for United States Magistrate Judge Clifford J. Proud in the United States District Court for the Southern District of Illinois. After a stint with the United States Attorney’s Office in Fairview Heights, Illinois, Tom joined the State’s Attorney’s Office in Madison County, Illinois, where he helped create the first ever Madison County Domestic Violence Accountability Court (DVAC) overseen by Judge Richard Tognarelli. Tom has dedicated his extensive trial work fighting for the rights and safety of victims in both criminal and civil court.

Tom Lives in Glen Carbon, Illinois and is happily married with one child.