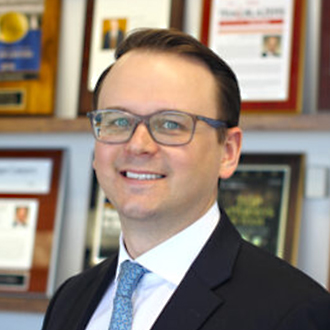 Mesothelioma
Andrew is dedicated to helping mesothelioma victims and their families.

Andrew is an Associate Attorney in MRHFM’s New York City office. He joined the firm in 2022 and focuses his practice on assisting men and women who have been diagnosed with malignant mesothelioma. Andrew understands that most of our clients and their families contact us during their greatest time of need. Because of this, Andrew strives to be there for his clients every step of the way.

Andrew has over a decade of experience representing victims of asbestos exposure in their pursuit of justice. He fights tirelessly for his clients and never shies away from a challenge.

Combining his knowledge of asbestos-containing products, differing exposures and civil procedure, Andrew has successfully navigated his clients through the rigors of both state and federal courts.  Andrew has also served on several trial teams throughout his career that have resulted in multi-million dollar recoveries for his clients.